You are here: Home / Personal Development for Business Owners / The Cost of Gaining Clarity

Would you prefer to listen to this article? Use the audio player below.

It Can Feel Impossible to Gain Clarity 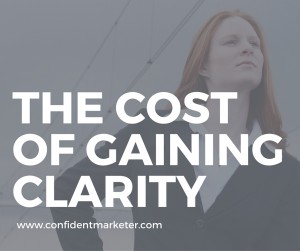 Have you ever wished that you could gain clarity for the direction of your business? Have you suffered a time in your life when you felt completely indecisive, stuck in the muck of thing, and unable to see your path forward?

Clarity is often hard to gain. We sometimes over-think what we are trying to do, or wear ourselves out by listing reasons in our heads for why we can’t get to a certain goal. We think we are clear about who we are and what we do, but our business doesn’t move forward like we think it should and we become discouraged.

Gaining clarity often means deep and sometimes painful self-reflection. It means giving up beliefs about why something can’t happen that we’ve sometimes had for our entire life. It requires giving up something so embedded in us that we would argue long and hard it’s not an excuse at all, it’s a fact. A reason. Truth. The trick is that it’s not. It’s an excuse, tightly wrapped in what sounds like a plausible reason.

Pay the cost for clarity and you will find that the payoff is worth every penny. Letting go of your most treasured and tightly held “reasons” frees you in ways that are impossible to imagine.

In my work with women who want to become more successful in their business I often hear excuses that are tightly wrapped up with reason.

Could This Woman's Business Grow from Gaining Clarity?

Earlier this week I got a long e-mail from a woman who wanted to know if I could help her with her business. This woman is skilled at what she does, has worked tirelessly in her “business” for years – in fact she has overworked. She has nothing to show for all her time and effort financially, but through her tireless work she has built deep community relationships, which, I could tell, she treasured. She had become the center for information in her community, and her reward for all her long hours of work was not financial, it was a sense of being looked up to as the best source for information in her community.

She can’t sustain that much longer. She’s realizing that she needs to have more financial freedom than barely making it and never having a day off at all. She’s getting tired, which is completely understandable.

In her e-mail she gave me all sorts of excuses about why she can’t make it, each excuse wrapped up in a “reason.”

When someone approaches me with a story like this I know that it’s going to be a long process of stark and sometimes uncomfortable self-examination. Change is totally possible but it’s not easy. Dropping the excuses we have held dear is tough work. We cling to them like a drowning man to a life raft because dropping them means facing changes we are unwilling to make. We are scared. For this woman, dropping her excuses and doing the work of making a true business out of her passion could mean facing the fact that it’s not a sustainable business. It could mean accepting that her business idea isn’t workable, that what she believes in so strongly is an avocation.

It’s my job to be honest about the work ahead. I knew that if I said, “Sure, I can help you” this hard-working woman would invest money but not her willingness to change, and I would be added to the long list of coaches and courses she had “tried but they just didn’t work.”

In part, here’s what I said.

You asked, after telling me part of your story, whether I could help you. Yes, I can, but only if you make the decision that what you have on your hands is a business that will thrive if you begin to treat it more like a business. You say that you “don't like the selling.” You have indulged in doing the parts of your work that you feel good about and enjoy, and you have not switched hats to see yourself as a business owner.

The Rewards of Gaining Clarity

Sometimes, it’s my job to push for the work of uncloaking excuses that are masking themselves as reasons. Not everyone will pay the cost for having clarity. They will eventually quit, or limp along with a hobby that they call a business. It’s not a matter of ability – often people who use excuses as reasons are quite talented and capable in what they do, and the world needs what they can bring to the table. It’s a matter of being gut-wrenchingly honest to one’s self to make that business work well. 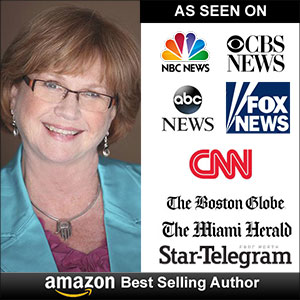